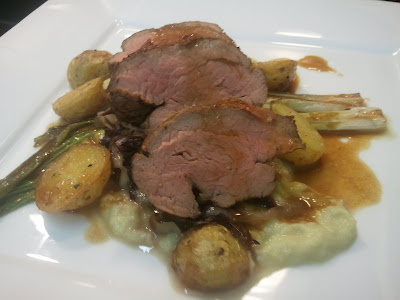 This delicious recipe is taken from various items that I have seen done at the restaurant where I work. This way by far the tastiest dish done this year. This feeds 2 took 1.5 hours to prepare and costs $40.

Preheat the oven to 300. Season the veal loin with salt and pepper and sear in a medium pan on high until golden on each side. Place on an oven rack and place in the oven until 130 degrees in side, about 10 minutes. Take out and rest until cool about 15 minutes. Wrap with pancetta and pan sear again on medium until pancetta is cooked, about 3 minutes on each side.

Cook all ingredients in a sauce pan on medium low until reduced to 1/4 cup. Strain and reduce by half, let cool and add a teaspoon of butter.

Boil fennel, leeks and garlic in a medium saucepan on medium high until tender, about 12 minutes. Strain an place in a food processor, add cream and blend, slowly add olive oil until puree is smooth.

Preheat oven to 425. Spray a sheet pan with olive oil and season. Place potatoes cut side down and spray with oil and salt and pepper. Cook for 25 minutes until golden. Turn off the oven and let stand in the oven for 15 minutes.

In a medium pan render the pancetta on low, once crisp and onion and cook 5 minutes. Turn up the heat to medium and add radicchio, let cook ten minutes and season. 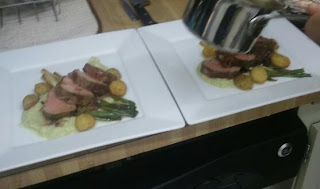 I also seared some scallions in the same pan I used to finish the veal. I plated it all together and the flavor combinations were amazing. Buon Apetitio!
Posted by Rick Truocchio at 3:18 AM