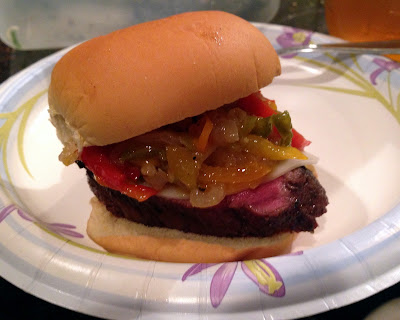 How do you turn up the standard BBQ hotdogs and hamburgers.. Start by making lobster rolls on hotdog buns like the previous post.  Then, instead of hamburgers you make filet mignon burgers.  Thats right!  You cook a whole filet loin on the grill then slice thick cuts, top it with slow cooked peppers and provolone cheese, put it on a potato bun and then of course serve on paper plates.  Thanks to Harout and everyone else who joined, it was a great day. This takes 1.5 hours, costs $75 and feeds 20 people.

Put all peppers in a hot skillet with olive oil and butter on medium heat.  Cook for 5 minutes then turn the heat down to medium low and let simmer 30 minutes or more.  Season with salt and pepper and serve on anything.

Chateau Briand
This French term is used to describe the entire filet mignon loin cooked whole.  I trimmed the fat and silverskin off of the loin and sliced off the tip and end piece leaving one large piece of meat about 2 feet long.  I seasoned this meat with salt, pepper, fresh marjoram and olive oil.  I seared it on all sides on a hot grill until it good great color, about 20 minutes total, then left it on the top rack of the grill for an additional 10 minutes.  I let it rest 15 minutes then sliced into the most beautifully cooked filet mignon ever.

Toss it on a bun and top it with the pepper mix and Provolone cheese.  Buon apetito!!
Posted by Rick Truocchio at 9:22 AM 1 comment: 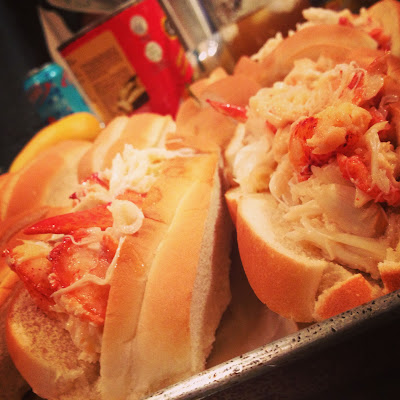 I put a little twist on this classic summer sandwich.  We had to kick off the summer with a BBQ and this was a great appetite starter.  I made 16 rolls and had plenty of left overs, so you can make the recipe for half the amount.  This recipe feeds 8-12 costs $60 and takes about 1.5 hours.

Start a medium saucepan on medium low heat.  Cook ramps for 10 minutes in 1 tablespoon of butter until softened.  Add remaining butter and creme fraiche until melted together.  Add marjoram, slat and pepper and then fold in chopped up lobster meat and lump crab.  Let simmer 10 minutes stir very gently and then turn off the heat.  Let stand 10 minutes.  Spoon meat into toasted rolls and serve with a lemon wedge.  Buon apetito!
Posted by Rick Truocchio at 11:49 PM 2 comments: